Corfu is the most northern and the second largest island of the Ionian Sea. Since ancient times, because of its strategic geographical position, the island of Corfu was a crossroads of civilizations.

During the 8th century B.C. the most important and powerful Greek cities organized expeditions in order to establish colonies in the West. In the context of these marine missions, Corfu emerged as an important station. In 734 B.C., Corinthians led by Chersicrates, originating from the aristocratic family of Bacchiadae, founded a colony on the island and named it Chersoupolis. According to another version quoted by Plutarch, in the mid 8th century B.C. Eretrians set a short-lived installation on the island but they were eventually expelled by the Corinthians.

The Corinthians chose to build their city on the Kanoni peninsula, on a particularly favorable geographical position, as it was flanked by two natural ports 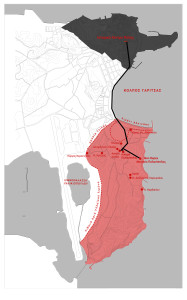 . (Fig. 2), approximately 2 km away from the modern town of Corfu. According to archaeological evidence the earliest settlement of the site dates at the end of the 8th century B.C.

Information regarding the topography of the ancient city derives both from archaeological findings and from references in literary sources. Of particular relevance are the descriptions contained in Book III of the History of Thucydides, where, on the occasion of “Kekryraika”, namely the narration of the events of the civil conflict between democrats and oligarchs that broke out in 427 B.C., territories and monuments of the city are mentioned. Thucydides refers to the two city ports: the Hyllaikos at the southwest, which is identified with the nowadays Chalikiopoulos lagoon and the port “that faces to the land”, at the northeast, otherwise known as the Alkinoos port, which was placed at the southern part of the Garitsa bay. According to Thucydides, at the last port, and very close to the market, there was a shipyard where the triremes of the Corfiot fleet were kept.

Another area of the city mentioned by Thucydides is “the meteors”, which were probably located at the hilly territory at the eastern part of the Kanoni peninsula, known today as the Mon Repos estate. Important city sanctuaries have been revealed there, such as the Hera temple (Heraion), the open-air temple of Apollo Korkyraios and the Kardaki temple. The ancient historian gives a description of the Heraion, as well as of the wider region, mentioning also that there was a small island opposite the sanctuary.

From the 5th until the 3rd century B.C. Kerkyra gradually evolved into a major naval power. Thucydides reports that around 453 B.C., when Kerkyra fought with Corinth about their common colony Epidamnus, it had a fleet of 120 triremes. Thanks to the trade and its contacts with the various cities of the Adriatic and the Mediterranean, Kerkyra managed to accumulate wealth and to emerge as an important economic power. It is indicative that in the Odyssey Homer depicts the Phaeacians, the residents of Scheria (a name also attributed to Corfu), as great sailors and their city as well organized, protected by a high wall and possessing a double port, near which the market and the temple of Poseidon were located.

The ARCHAEOLOGICAL SITE OF PALEOPOLIS

The name Paleopolis is encountered for the first time in medieval sources and refers to the region extending from the Garitsa bay down to the Kanoni peninsula (Fig. 2). The name was used to describe the abandoned ancient city of Kerkyra (or otherwise known as Korkyra), since some of its ruins were still visible then. The archaeological evidence suggests that the area was initially inhabited in the late 8th century B.C. and for many centuries consisted a central place of the ancient city. Its gradual abandonment began in the 6th century A.D. and during that time the settlement was relocated to the area of the present Old Fortress.
The most significant monuments located in the Paleopolis area are:

The first excavations at the Paleopolis area began during the occupation of the island by the French (1807-1814). In their effort to dig a fortification ditch aiming to connect the two ports (1812-1813), the French troops brought to light important antiquities. At the same period an attempt was made to explore a cave located behind the Early Byzantine basilica which according to popular tradition contained hidden treasures. In 1846, a research was undertaken at the area west of the church, where parts of the mosaic floor of the narthex were revealed. In 1912, limited excavations were conducted at Paleopolis by the German architect Wilhelm Dörpfeld, who at the same year took also charge of the excavation at the Temple of Artemis Gorgo. 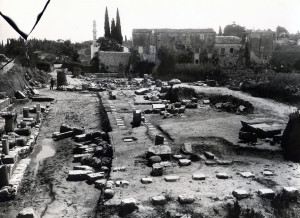 Γενική άποψη ανασκαφής Ιερού Αρτέμιδος (1912-1914). at the sanctuary began in 1910 (Fig. 3), when parts of the west pediment of the temple depicting Artemis-Gorgo were accidentally revealed. The excavation works were initially undertaken by the Greek archaeologist Frederick Versakis, but later the direction of the excavation was granted to the German Emperor Wilhelm Kaiser ІІ, who financed it until 1914 and appointed Wilhelm Dörpfeld as field director. With the outbreak of the 2nd (1st) World War the works stopped and resumed in 1920 under the direction of the archaeologist Constantinos Romaios.

Systematic excavations in the area of the Early Byzantine basilica 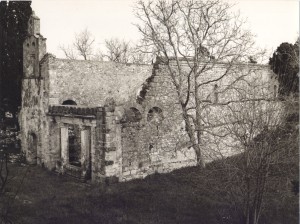 Παλαιοχριστιανική βασιλική της Αγίας Κερκύρας began in 1936 by the Archaeological Society and were led by the archaeologists Andrew Xyngopoulos and Ioannis Papadimitriou (fig. 4). In 1939 I. Papadimitriou continued his research along with restoration and consolidation works.

From 1955 to 1959 research in the area was conducted by Vassilios Kallipolitis. The result of his research was the recovery of mosaic floor fragments, probably from the church’s baptistery, and also the discovery, based mainly on the pottery finds, that the area was the center of the ancient city and that it was already inhabited by the 8th century B.C. Kallipolitis also pointed out that construction material collected from collapsed buildings of the ancient city was used for the erection of the basilica. Furthermore, beneath the basilica’s foundations, he revealed a round plan structure that was probably used as council house (bouleuterion) or odeon and he also located in various parts of the excavated area fragments of the paved floor of the ancient agora.

During 1961-1964, part of a roman bath was revealed in the Olive Institute plot at the west side of the ancient agora. It was initially excavated by V. Kallipolitis and afterwards by G. Dontas and P. Kalligas. According to the findings the bath was probably founded in the late 1st or in the early 2nd century A.D. and it was destroyed after the end of the 5th or in the early 6th century A.D. Today, four large and two smaller rooms and a corridor are preserved as well as a space that probably functioned as an inner courtyard.

From 1987 to 1996 excavations were conducted in the area of Paleopolis under the direction of the 8th Ephorate of Prehistoric and Classical Antiquities in cooperation with the Louvain La Neuve University of Belgium and the Brown University of the USA. Due to these investigations important antiquities were brought to light, such as certain installations of the Alkinoos port (C) 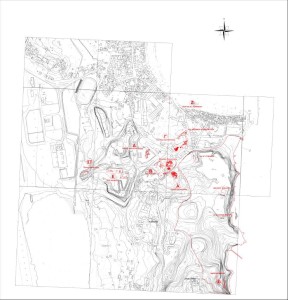 Χάρτης με αρχαιότητες στην περιοχή της Παλαιόπολης. and parts of the ancient market north of the Early Byzantine basilica (Fig. 5 A). A bath complex (A)

Παλαιοχριστιανική βασιλική της Αγίας Κερκύρας of the Late Roman period was also excavated (Fig. 5 A), whereas further investigations conducted at the same time at the area of the agora (B)